A little past seven, the family has already gathered outside the house; set to go to Binondo Plaza - the meeting spot set by our Kho Youth League president, Zenaida Co. Although the rendezvous time is still 8.30 and our house is just a good half hour's ride away, dad insisted that we depart early as many streets are potentially crowded by teams of presidential, senatorial and local candidates trying to win public interest by closing down some roads to entertain the masses with their own brand of hodgepodge "entertainment" and campaign speeches.

March 27, 2010 - March 28, 2010 (Saturday - Sunday)
For the year 2010, the Kho Youth League decided to go to Naga, Bicol for our annual out of town trip. It is a 9 hour bus ride from Manila to the Naga city proper using the SLEX (South Luzon Expressway). With this in mind, most of us opted to travel by night in order to arrive at our destination early the next morning. 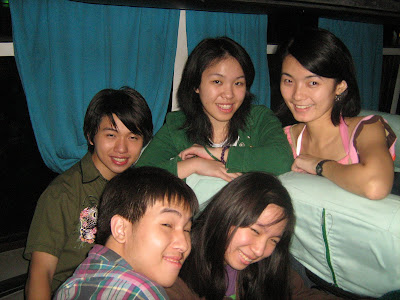 Together with my siblings and 23 other youth members of our association, we departed from Manila at approximately 9 pm and arrived at Naga City roughly at 7 in the morning the next day. Our bodies, half-frozen from the bus aircon. 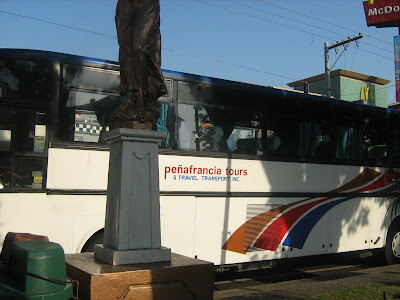 Our first stop was Biggs' Diner, Centro Branch for our breakfast. Originally Mang Donald's, the store name was later changed to Biggs' Diner due to some legal complications against the name. Go figure. 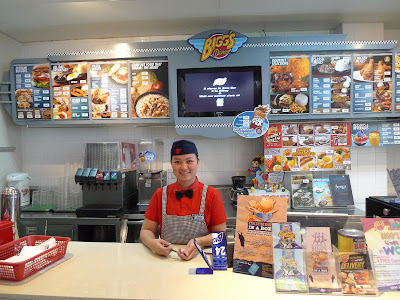 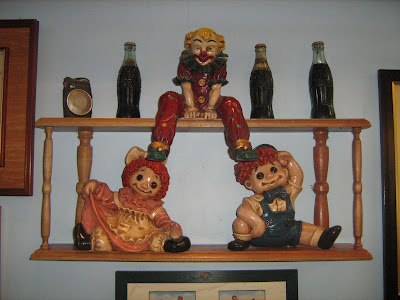 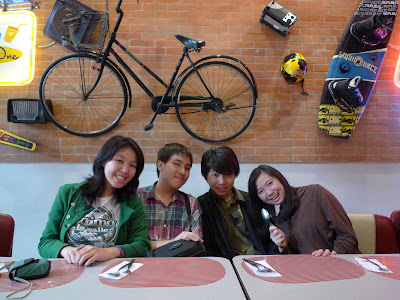 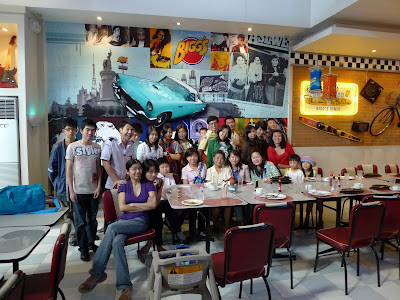 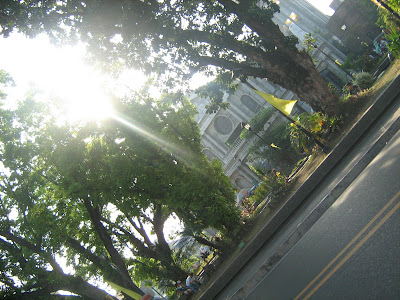 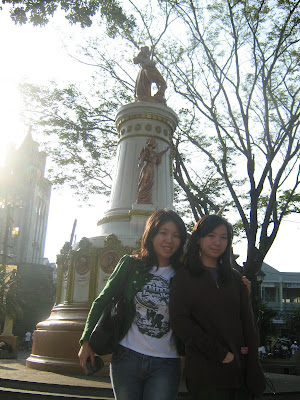 After breakfast, we boarded the bus once again and headed to Camsur Watersports Complex (CWC). Quite timely, Manny Villar, presidential candidate and his team happened to be in the same vicinity together with other big names as Manny Pacquiao, senatorial candidate Ramon Mitra Jr., Willie Villarame and Ara Mina to name a few. 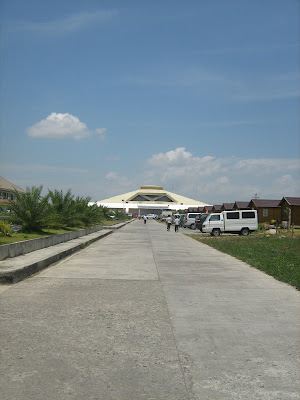 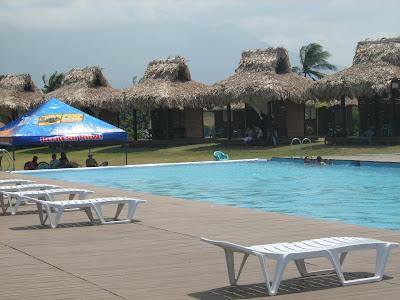 We lodged at the Villa del Rey Cabanas section - I shared rooms with my younger sister and a good friend, Stephanie Obiles. The room we got, Number 14, was fairly comfortable; it was furnished with two single beds, a television with a DVD player, a decent bathroom and some shelves to put our things. During our free time, Steph and I left our group to explore the said resort, figuring out the different activities that could be tried out.

Below is a map of Camsur Watersports Complex: 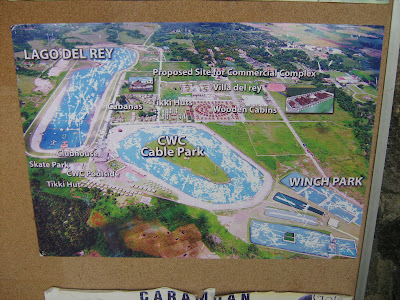 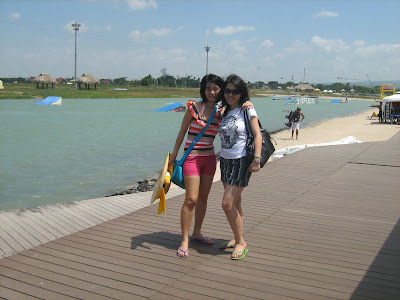 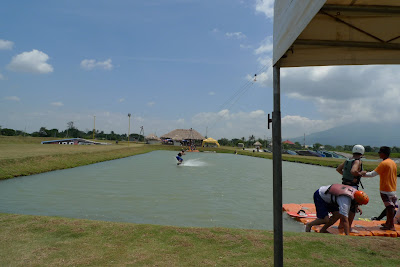 That afternoon, after lunch, the group tried Lago del Rey. A man-made lake equipped with several fun, floating obstacle games. The price list of the activities at Lago del Rey can be found below: 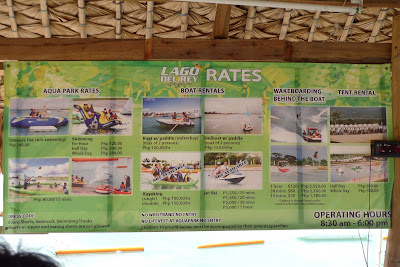 The obstacle courses I mentioned can be seen from behind me. Among favorites are the trampoline, the iceberg and the slide. 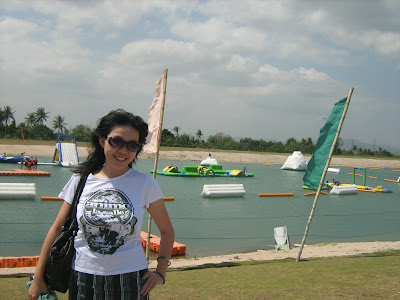 After a tiring afternoon of climbing up and down floating obstacle courses, we finally retreated back to our rooms and changed for dinner. Meeting at the lobby, we managed to steal a couple of photos with Mon Mon Mitra and Willie Villarame. Can I say that Mon Mon was especially patient with us and he really does look good in person. 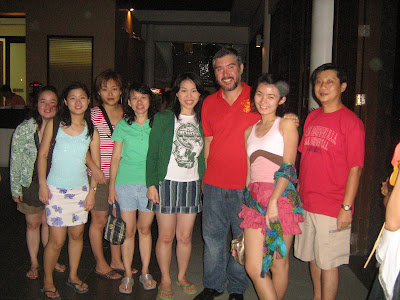 We had dinner at the Triboo Grill, where we were served several delights as Crispy Pata, BBQ, Laing, Bicol Express, Sinigang and other Filipino favorites. All of which were care of our president's sister-in-law, Auntie Elsa.

Below is a group photo of the Kho Youth League at Triboo Grill. 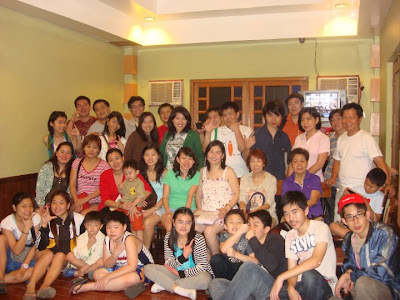 It was an extremely filling first day.

*Some photos were taken from Stephanie's photo album.

Conceived by Kwagoo at 14:46 No comments:

Thoughts to Live By

It's been two months since my last blog post, and much has occurred in the past nine weeks from association meetings, events and inductions. I do not intend to elaborate on these endeavors any more. In addition to all these activities, I have a demanding job that leaves me tired by the end of the day.

Not that I am complaining, but at some point, I cannot deny my frustration and utter exhaustion - there are moments wherein I feel myself sliding away from reality into a blank space in my head, other moments I can feel myself choked from within like a knot building within my chest getting tighter with each breath I take, other days I have an undetermined fear swimming in my belly like a fish swishing its tail playfully back and forth. Panic attacks, I call them. Not my favorite feeling, but regardless how often I try to shrug them away, they linger annoyingly like a belligerent companion seeking my attention.

After an intoxicating January and February, I've put my foot on the ground and dedicated my March for personal space, personal time and relaxation. This is the month where I am doing things for myself. Although there might be a couple of extra activities on the side, March is the month for myself.

While doing my mall visitation and checking today, I found a good "Day Starter" posted on the bulletin. Without hesitation, I copied it on my notebook. I need a little inspiration and I don't mind having one to remind me to be appreciative of what I have.

Permit me to share the short piece below. Though to some, the items may sound like an over reminder. I agree, we've already had our fair share of these survival tidbits - but I've realized it is good to keep them in a visible spot when things get out of hand, common sense does have a tendency to become a dastard hiding from the arrows of emotional distress.

You shall not worry, for worry is the most unproductive of all human activities.

You shall not be fearful, for most of the things we fear never come to pass.

You shall not carry grudges, for they are the heaviest of all life's burdens.

You shall face each problem as it comes; you can handle one at a time anyway.

You shall not take problems to bed with you, for they make very poor bedfellows.

You shall not borrow other persons' problems. They can better care for them than you.

You shall not try to relive yesterday for good or ill, it is forever gone. Concentrate on what is happening in your life and be happy now.

You shall be a good listener, for only when you listen do you hear ideas different from your own.

You shall not become "bogged down" with frustration, for 90 percent of it is rooted in self pity and will only interfere with positive action.

You shall count your blessings, never overlooking the small ones, for a lot of small blessings add up to a big one."
Conceived by Kwagoo at 21:46 1 comment: