It's going to be a beach-filled summer!

Summer is just a few more days away, and my friends and I are already planning our next outing. Finally, we were able to make reservations at La Luz Beach Resort - a beach we've been meaning to go to, or if not, a beach I've been nagging to go to for almost two years ever since I read this - just perfect, no "rude oglers". This year, I'm doing most of the planning parts and I think I've done a successful job of getting everyone's approval and chaining them to that conviction because of the 50% down payment required by the said resort for the reservation.

Pictures were lifted from the La Luz Beach Resort site and Photoshop-ed a little bit.
(Please note, it took me practically forever to make a reservation at this resort - for some reason their customer service is a little slow - irritated me that I was following up on their responses via email, text and even by calling - the first two garnered no response, although they claimed to have replied.. twice!)

The next big question after reserving the beach is the bathing suit. After my boyfriend's rather expensive attempt to make me wear a bikini, I finally learned to find the inner bikini body in me and actually feel comfortable in wearing one - provided that it gives me the support and coverage that I need. Post my grandmother's demise, our family has been banned from wearing yellows and reds in the next 2 years - so my boyfriend's red hot Victoria Secret bikini would have to stay in the closet for that time. Not to be held back, I took the initiative of actually trying to look for a bikini myself.

Surfing online, I found Cocotini Bikinis and absolutely fell desperately in love with her collection. The additional details most definitely add to the overall appeal of the bikini. Compared to the many non-descript swimwear I've been finding online, which generally showcase the same cuts with just a variety of printed patterns, Cocotini has added some embellishments and features that make the products stand out and not look like just-another-bikini. 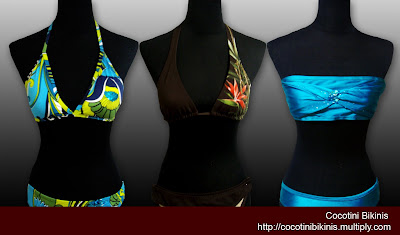 Pictures were lifted from the Cocotini Bikinis site and Photoshop-ed a little bit.

To cut the story short, I sent a PM detailing my inquiries. I think I was so desperate, not to mention, so eager to get the bikinis, that I think I checked my multiply every other hour just to check if there was already a reply. :D

We finally agreed to meet at her place last Thursday, after my work, so I can fit her swimwear since I have a rather hefty top and might not fit in the general Large for Asians. The owner was so kind to me the whole time, as she showed the tops that she thinks would suit my size. She even taught me the proper ways of wearing and caring for a bikini. What happened? I bought two bikinis for only 1,200 php (Well, one two piece and the other, just the top). I think that was a rather good deal, don't you think? Well my boyfriend gave me his two thumbs up for my purchase.

Overall, it was absolutely a five star buy for me and I couldn't wait to show it off to my friends in our definite summer outing at the end of the month.

*giddy with excitement!
Conceived by Kwagoo at 07:23 No comments:

A week ago, I went to a nearby eye clinic and had my eyes checked. I observed that I was experiencing awful headaches, vertigo and a difficulty in focusing my eyes. Through the test, I learned that I have already incurred eye damage - near-sightedness. Due to this, I feel compelled to revamp my current lifestyle of being in front of the computer over 15 hours a day.

Today, perhaps paired with the lack of sufficient rest and sleep, I am experiencing the same throbs in the head and a slight hint of nausea as I battle the computer screen. Yes, I've already reduced the screen brightness to almost nothing but I cannot deny how much it still pains my eyes.

I have no intention of compromising my health to this degree, as my eyesight is one of my favored pride and asset - needing to wear corrective glasses is a very regretful thing for me, indeed. I am asserting myself to increase my Vitamin A intake and improve my diet, as I've noticeably become wider in the past few months. I don't know how I can squeeze in more rest into my schedule, but I will strive to find the best possible way to do just that. Physically, aside from a substantial weight gain, people notice that I am usually haggard, aged and tired - exhibiting irritability, fatigue and a general lack of enthusiasm.

Are my earnings a good enough reason to be enduring this? After my back pain a couple of weeks ago, I've come to thinking that my lifestyle these past five months is slowly depriving me of my life, and is, quite frankly, killing me. Something must be done, and that something must be done soon.

I really do hope everything would turn out alright.
Conceived by Kwagoo at 12:56 1 comment:

This lunch, I challenged myself with a Wendy's Baconator, a sinful pack of calories and fat paired up with some deep-fried french fries and a glass of Sprite - truly I can imagine it whacking my whole system with all it's juicy lard. Processed pigs and cows held together with white mayonnaise and a couple of buns.

I wasn't able to finish my burger in one, even two seatings - it lasted me the whole day just to completely consume the whole burger - a serious slap to a girl who used to pride herself for her seemingly insatiable appetite. My current lifestyle is depriving me of my daily food intake and has already weakened my buffet bonanza powers.

And right after finally overcoming this gigantic feat, I get to click onto this site from a work mate's YM status.. Ladies and Gentlemen, introducing the "Bacon Explosion Pork Bomb Barbecue Recipe" by the BBQ Pit Boys.

You must admit, that bacon weave looks mighty tasty.

That's why heart disease is the leading killer of mankind - but at least you die happy.
Conceived by Kwagoo at 22:37 No comments: