Last August 14 (Friday), our boss invited us to Home World's product launch of a revolutionary cookware called Neoflam at Mega Atrium of SM Megamall, Ortigas. Imported from Korea, using Ecolon technology, Neoflam boasts to be quite a special non-stick pan made entirely of natural materials. Demonstration of its fantastic non-stick powers can be seen in the video I've found in YouTube below. In addition, it was mentioned and constantly reiterated during the program that Neoflam pans are an asset to have as it does not emit any harmful chemicals that would translate into the food; and thus, it is very environment-friendly.


The program was hosted by Unang Hirit talk show host, Suzi Entrata-Abrera. The event kicked off with a few video slides of how Neoflam products are manufactured and tested. After which, the audience were treated to a cooking show with Chef Gino Gonzales. Chef Gino demonstrated three different cuisines using the Neoflam pans. I apologize for not recalling the names of his dishes, but I did note down the recipes - French Bread topped with Spanish Chorizos and fried quail egg, Chinese style clams and Butter cake topped with caramel sauce and whipped cream. To be honest, imagining the flavors in my head was just divine. 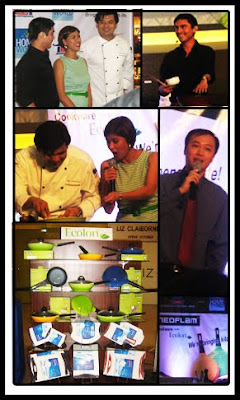 The highlight of the event though was a 15 minute challenge between Chef Gino, and celebrity chef, Marvin Agustin. Making their own pasta dishes, Chef Gino opted to do a Filipino inspired Puttanesca, while Marvin decided to do Pasta ala Neoflam - slash pesto with prawns, bacon and yum yum yum.

Select members of the audience were treated to taste the chefs creations. We, on the other hand, being not so lucky, lined up for some good buffet food fried, sauted and served by Chef Gino's students at the CACs.

To be honest, I was thoroughly impressed by the Neoflam launch and do commend it to be a fantastic kitchen apparatus! For those interested, Neoflam pans are now being sold in select SM Home World stores specifically North Edsa, Megamall and Makati.
Conceived by Kwagoo at 23:35